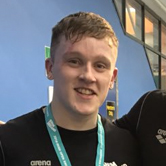 My journey into competitive swimming started when I was 6 with Mallow swans swimming club. I won multiple national age group championship titles from ages 12 through to 17 as a junior and found myself on the podium at senior level multiple times with Limerick swimming club relays while breaking Munster records doing so and individually twice, winning silver at both short course nationals and long course nationals. I represented Munster at both the Portuguese and Scottish national championships and was Munster team captain at a camp in Tenerife in 2016. I was a part-time athlete of the High-performance centre in Limerick as I undertook my final three years of secondary school in Mallow. In 2016 I moved to U.L to begin my university studies in Industrial Biochemistry (BSc) and moved to Limerick swimming club while training full time with the High-performance centre until calling it a day in November 2018. I have one more year left in university and hope to study a masters degree or graduate entry medicine here at U.L afterwards and be involved in coaching with Limerick swimming club for the foreseeable future.